Turning on and tuning in at the hurdy gurdy 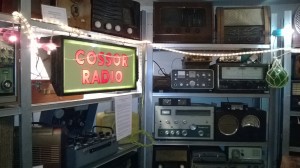 For many tourists in Dublin on these sunny, spring days, a visit to Howth for its coastal walks, views and fresh fish and chips is on the radar. Some will also make the pilgrimage there this weekend for International Marconi Day, when radio and technology enthusiasts remember the oft-cited father of radio and pioneer of wireless telegraphy. They will be making their way to the highly enjoyable ‘Hurdy Gurdy Radio Museum’, the vintage radio museum in Martello Tower North #2 of the peninsula.

Innovations like Marconi’s concerning long-distance radio transmission will be documented there next weekend, as they are every weekend. It was in this tower in 1905 that a Marconi station was installed to test a series of signals between the telegraphy station and H.M. Monarch, a telegraph ship travelling between Howth and Holyhead. These days, the tower is a two-storey collection of radios, gramophones and other radio-related paraphernalia collected by amateur curator and lover of radio Pat Herbert, over fifty years.

On a guided tour of the museum, that probably lasts as long as visitors’ interest dictates, visitors are treated to energetic accounts of the major innovations along the journey of communications development. From basic signals to mechanical and electrical devices, to the wireless systems that paved the way for radio broadcasting in the 1920s, the museum marks the milestones.

The tour tells of the inventors and their stories. There are details of the 19th century achievements of Samuel Morse. There is the story of rivalry between engineers Thomas Edison and Nikola Tusla through their respective contributions to direct current (DC) and alternating current (AC) electricity systems (and the intriguing events after the latter’s death). There is the association of Howth with another father of radio, Lee de Forest. This inventor of the system that led to sound on motion pictures also conducted successful wireless transmission tests between Howth and Holyhead in 1903. Tales of the clamour to patent inventions weave through many of the stories.

Communications equipment of all sizes and ages are found in the museum’s cluttered rooms. One cannot avoid being struck by not just how communications have evolved and human kind’s innovating spirit, but by the passion of those who keep this museum (open daily from 01 May) going. It was borne out of a labour of love, and is sustained by it, along with other voluntary staff, recruited through community employment schemes. One senses the passion in the squeezing of objects into every crevice of these wonderfully nerdish, time-warped rooms. One feels it in the tour guides’ jam-packed sentences.

Pat Herbert’s love of radio grew out of listening to an All-Ireland football final on radio in the west of Ireland in 1947. The game was played in New York, the broadcasting technology possible through achievements such as Marconi’s wireless reporting of the America’s Cup yacht race some forty-eight years earlier. For radio enthusiasts, the idea behind Marconi Day is to keep the spirit of invention alive. Still informing, collecting, adapting, still making point-to-point contact with places near and afar, the ‘Hurdy Gurdy’ would do Marconi proud.